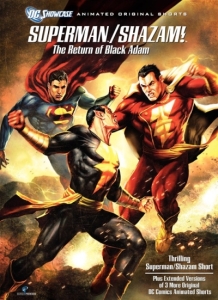 When I was a little kid I loved Superman. I watched the old black and white TV shows and all the cartoons. I wanted to be Superman so bad.

Then one day while someone from my family was in the hospital I saw a comic book in the hospital gift shop. It was called Shazam and it contained the stories of Captain Marvel, the world’s mightiest mortal.

I’ve been a fan of Captain Marvel ever since because of his old-fashioned values and how he still acts like an innocent kid from the 1940s.

Just the other night I finally got around to watching the DC Comics animated short Superman/Shazam: The Return of Black Adam and I was not disappointed. The short is only 25 minutes long but it was packed with a ton of action as Superman and Cap battle the evil Black Adam. Think of Black Adam as the reverse Captain Marvel.

My only regret with this DVD is that it was not a full-length feature. I would love to see the Big Red Cheese get his own DC Animation feature film as at one time Captain Marvel was the comic book superhero even outselling Superman.