You can add the Vigo County Sheriff’s Office in Indiana to the ever-increasing dumpster fire that is Facebook racism. One of their long time deputies was recently fired. The reason behind the termination was not initially made public until local media filed a  public information request.

It seems that the good deputy had somewhat the obsession with the Confederacy and its infamous flag, or as I like to call it the traitor’s rag. I don’t know if the deputy was born in raised in Indiana but the last time I checked, Indiana fought for the Union.

On his Facebook, the deputy allegedly posted a picture of a Civil War reenactment with the caption “It’s not just about history … the South was right!” Reportedly, the deputy has a history of posting memes for several years that could be construed as racist. 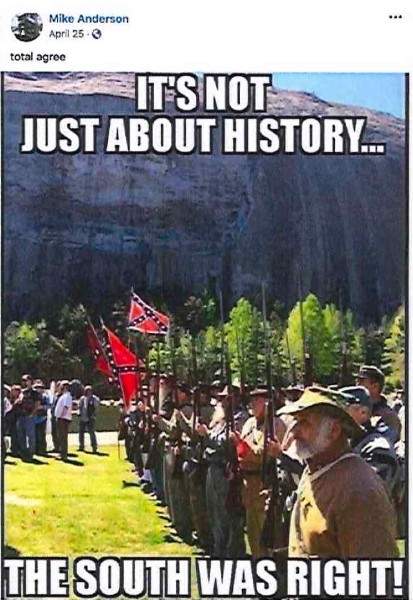 Here’s the thing though. The deputy was not fired by the Vigo County Sheriff’s Office. He was fired by the company that employed him as a school resource officer. As far as the Vigo County Sheriff’s Office is concerned, the Sheriff said “Nothing he posted is a violation of our policy,” and that “deputies should be careful not to post things the public finds offensive.” The deputy is not even facing any disciplinary charges.

This is another case of you can be a racist cop if you want, just keep it on the down-low, much like the Bexar County Sheriff’s Office in Texas that I posted about recently. However, it seems that the deputy is in the process of retiring.  Gotta keep that pension, you know.

My websites have been around four times longer than the Confederacy existed. Build me some fucking statues.

…but I prefer this one.