I’ve been a fan of comic book heroes since I was young. From watching the Batman ’66 reruns to the Super-Friends cartoon to picking up my first copy of The Flash from a 7-11 in the 70s, I’ve always been a fan on the superhero genre. In the late 80s as a young adult, I came across a comic at my local comic shop that caught my eye because of the protagonist’s aesthetic. It was Hub City’s trench coat and fedora-clad vigilante, The Question as written by another comic book legend Denny O’Neil and drawn by gritty artist Denys Cowan. 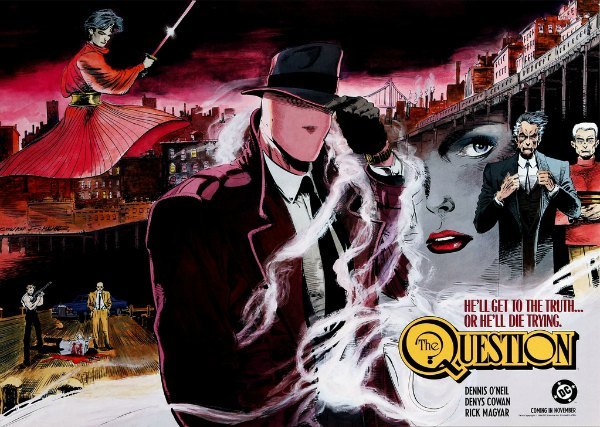 For those who may not be familiar with the character, news reporter Vic Sage dons the faceless visage of The Question to get the answers a journalist just can’t get. While Ditko wrote him in the 60s as a vigilante with a black and white moral code, O’Neil took the very unique approach of writing The Question as a Zen detective dealing with various shades of gray. While O’Neil’s take was a far cry from Ditko’s, he stayed true to the character’s core principle of an insatiable need to find the truth.

I first got on the internet and started creating websites back in the late 90s before blogs were even a thing. Back then mostly everyone used screen names to protect their identity. Influenced by The Question, I chose the name of TheTrenchcoat. (Not a typo, all one word with two capital Ts.) As many of you know, when Columbine happened, this led to me being confused with the so-called Trenchcoat Mafia. This was the impetus which got me into writing about crime online since I wanted to dispel many of the mistruths of that fateful day, which many are still told today. You might even say that I had an insatiable need to find the truth. The rest is history.

As I posted on social media yesterday, had it not have been for Steve Ditko creating The Question there probably would not have been the Trench Reynolds you see today. So from the bottom of my heart, thank you, Mr. Ditko.

One thought on “Thank you Steve Ditko for creating me”