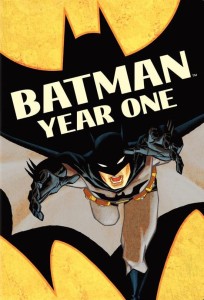 It’s been a while since I read Year One. I probably haven’t read it since shortly after it came out however I’m sure this is still pretty faithful to the comic since the DC Animated series of movies are either as good or in some cases better than the comics. I really think they should let Bruce Timm run the comics and the live movies as well but that’s another rant.

Anyway if you were looking for lots of grappling hook and ass-kicking action from Batman this is not the movie for you. The title of this movie really should be James Gordon: Year One as it focuses on his first year with a corrupt Gotham PD.

Now don’t get me wrong, this still makes for a good story as James Gordon is a badass in his own right. However, this is basically a crime drama with occasional glimpses of Batman.

I didn’t care for the animation style of this feature though. It reminded me too much of Scooby-Doo Hannah Barbera.