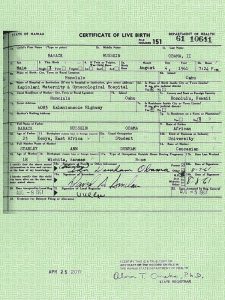 As you may know, I am not a huge fan of President Obama mostly because of his so-called healthcare reform. However, I think he did himself a great disservice by releasing his birth certificate. Personally, I don’t think the whole ‘birther’ debate was worthy of a response from the President. Only people with the relative IQ of a houseplant believe that President Obama was not born in this country.

The whole birther movement is the right-wing equivalent of the people who kept claiming that President Bush stole the election in 2000. They’re just a bunch of sore losers who can’t get over that their guy didn’t win.

Plus the birthers won’t be satisfied with this. I’m sure they’ve already come up with some idiotic theory that this is a fake. People like this can’t be reasoned with so in my opinion, President Obama should have just ignored them. Now in the birthers’ eyes, his response gives them legitimacy.