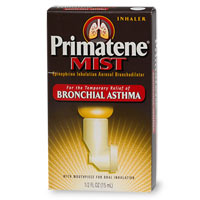 I’ve had asthma since my early 20s. I was officially diagnosed with it by a medical professional about 10 years ago. I’ve been on a few medications for it. I had been prescribed Advair and Albuterol inhalers and Singulair pills. Even when I did have health insurance coverage the prescriptions could still run pretty high.

About a year ago during one of my many recent unemployed periods, I couldn’t afford to get my Albuterol inhaler refilled but I was able to purchase an over the counter Primatene Mist inhaler. It was like an epinephrine epiphany. Not only does it work better than all three of my former prescriptions combined I don’t have to use it as often. While I was hitting my Albuterol inhaler several times a day I’m fortunate enough that I only use my Primatene inhaler once a day even if that. So not only does it work better at $14 at my local CVS it’s more cost-effective.

Primatene Mist inhalers are being discontinued because they use chlorofluorocarbons (CFCs) as a propellant (spray) to move the medicine out of the inhaler so patients can breathe the medicine into their lungs.

CFCs harm the environment by decreasing the earth’s ozone layer. This layer of the atmosphere protects us from some of the sun’s harmful ultraviolet radiation, which can increase the risk of skin cancers and cataracts. The United States and most other countries have signed an international agreement to phase out CFCs and other ozone-depleting substances.

Really? Really FDA? You’re taking this off the market because of the fucking ozone layer? I’m sure it has nothing to do with the fact that Primatene is the only over the counter asthma inhaler. Now people who have used Primatene with no problem will have to get a prescription inhaler that not only costs more but is less effective.

Besides how much ozone depletion could the tiny inhalers actually cause?  I mean who cares if people with asthma can’t breathe as long as we’re satiating our white liberal environmentalist guilt right?

Luckily according to the Primatene website they are working on an inhaler that does not use CFCs. If it doesn’t work as well as the current model I will personally deplete the ozone myself.