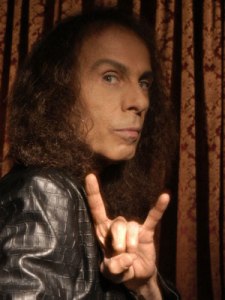 Last night it started out as a hoax that Ronnie James Dio had died. Then his wife Wendy Dio said that Ronnie was not in good shape but he was still alive.

Now it has been announced that my one true musical idol has passed away after his battle with stomach cancer exactly a month since the death of my only other metal hero Peter Steele had died.

In my opinion, Ronnie James Dio had a way of crafting lyrics that no other mortal possessed and was the main influence on my own music writing style.

And he hadn’t lost a step since his first days with Rainbow.

He had so much more music to give.

I do have other metal heroes but they are only lesser idols compared to Ronnie James Dio.

You will be missed terribly.

All hail his name. m/