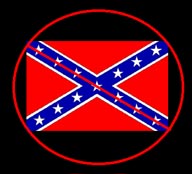 Ok, so I’m reading an article in the local news rag (The Charlotte Disturber) about a local high school student who got suspended once for having the Confederate flag in the back window of her truck and then got in trouble again for wearing the Confederate flag on her t-shirt. This got me to thinking about how both sides of this argument are so very wrong.

Let me first dispel some rumors about the south. Of all the many years I’ve spent in the south I have seen fewer instances of racial hate crimes on the news, than all the years I lived in the northeast. Rednecks exist in every state north or south. Just go to Millville New Jersey sometime. And it’s not just a southern thing either. I have seen many a confederate flag flying in the state of New Jersey.

Now to the issue at hand. Some southerners cling to the notion that the Confederate flag shows pride in their southern heritage. Now I have no problem with people being proud of where they came from. Which is why I wear my New Jersey Devils hockey jersey every chance I get, but I digress. But I see three problems with flying that flag. One, um….hello, the civil war is over, you lost, get over it. I mean it’s like flying a flag that says “Hey we’re proud that we lost”. Secondly, unfortunately, hate groups like the KKK and neo-nazi skinheads (not all skinheads are neo-nazis) have taken the flag as their own. So now most of the country views the flag as a symbol of racism. Hell, I even used to have the confederate flag t-shirt from when Billy Idol’s “Rebel Yell” was popular but I wouldn’t dare wear it today. No matter how much you try to justify that it’s not a symbol of racism it’s too late. The swastika is also an American Indian symbol. But since World War II not too many tribes have been using it. Thirdly it’s not even the true flag of the Confederacy. It is the Confederate Navy Jack. The true 1st flag of the Confederacy looks like this…

But that’s still a Confederate flag. My suggestion to you is if you want to show your southern pride, come up with a new flag instead. And please for the love of God stop requesting “Freebird” on the radio.